What are your calculator expectations?

This past year I tutored a student in Algebra 2.  He was clearly a good math student but his confidence had been shaken.  He was new to our area.  From his perspective his new school was intimidatingly large, and his math teacher must have felt somewhat intimidating as well.  Even though he was considered an advanced student, he didn’t feel like he could keep up with the expectations. 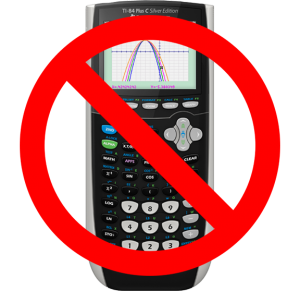 One of his concerns was that his teacher would not allow the use of the calculator in class.  As the year progressed she did eventually allow students to use a calculator but in those first weeks everything had to be worked out long hand, and if graphing, then plotted by hand.

It was different approach than I would take in my own classroom, but it was not my place to comment on the teacher’s design.  Instead, we pushed through long division, ugly numbers, and tables of points as we worked together each week.

My question: how much math computation do students at the advanced Algebra 2 level need to do by hand?  Do you specifically allow or not allow the use of calculators for any or all computation?

I’m also curious – what are your expectations for graphing by hand?  Do you like to check off those skills early in the year to be sure students have mastered graphing before introducing Desmos (or whatever calculator you use)?  Or do you jump in using a calculator from the beginning?


Last – my friend who taught pre-calculus used to lobby that our assessments in school should always be two parts – one part allowing a calculator, and one part not allowing a calculator.  Her point was that some of the “big” tests like ACT, SAT, and AP tests had some restrictions on parts of the test.  (I need to know - is that still so?)

How do you tackle this idea "…the calculator is a tool that students must use strategically, deciding when and how to use it.”